A scalable pipeline for designing novel organisms, such as xenobots

The following images (plus a few more) can be downloaded here. All images are released under a Creative Commons license. 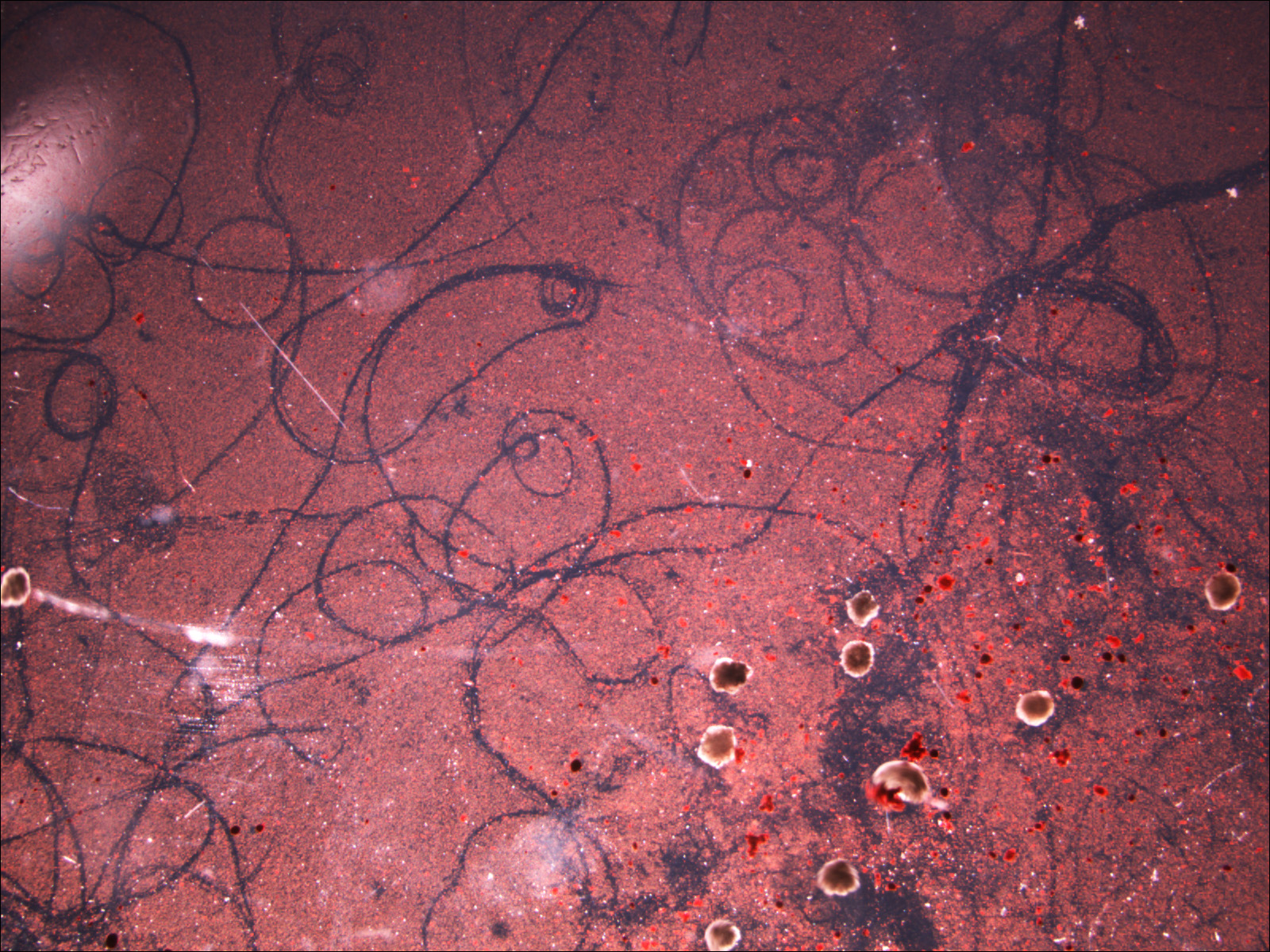 The traces carved by a swarm of CDOs as they move through a field of particulate matter. This image was selected by Nature as one of the best science photos of January 2020. 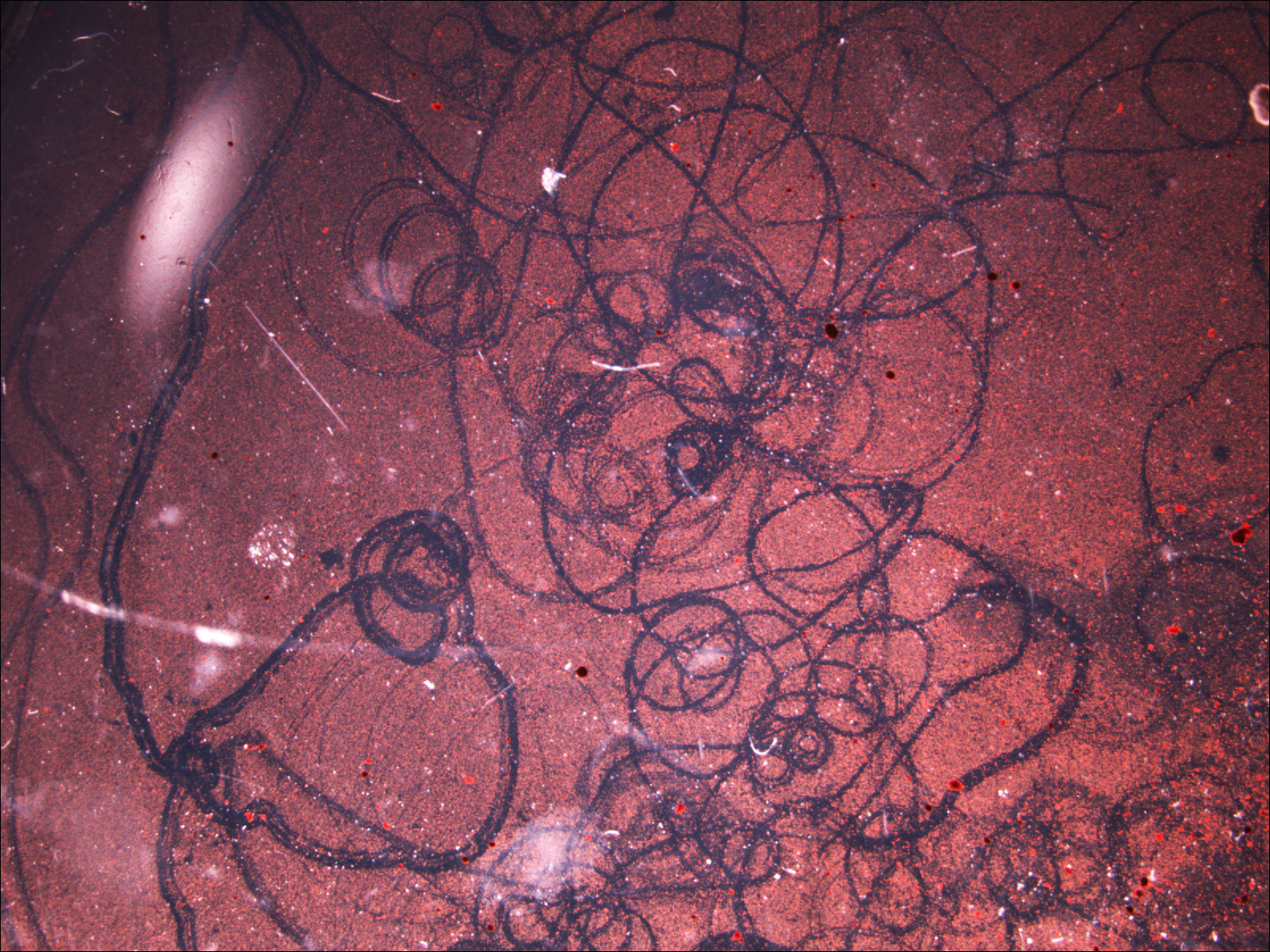 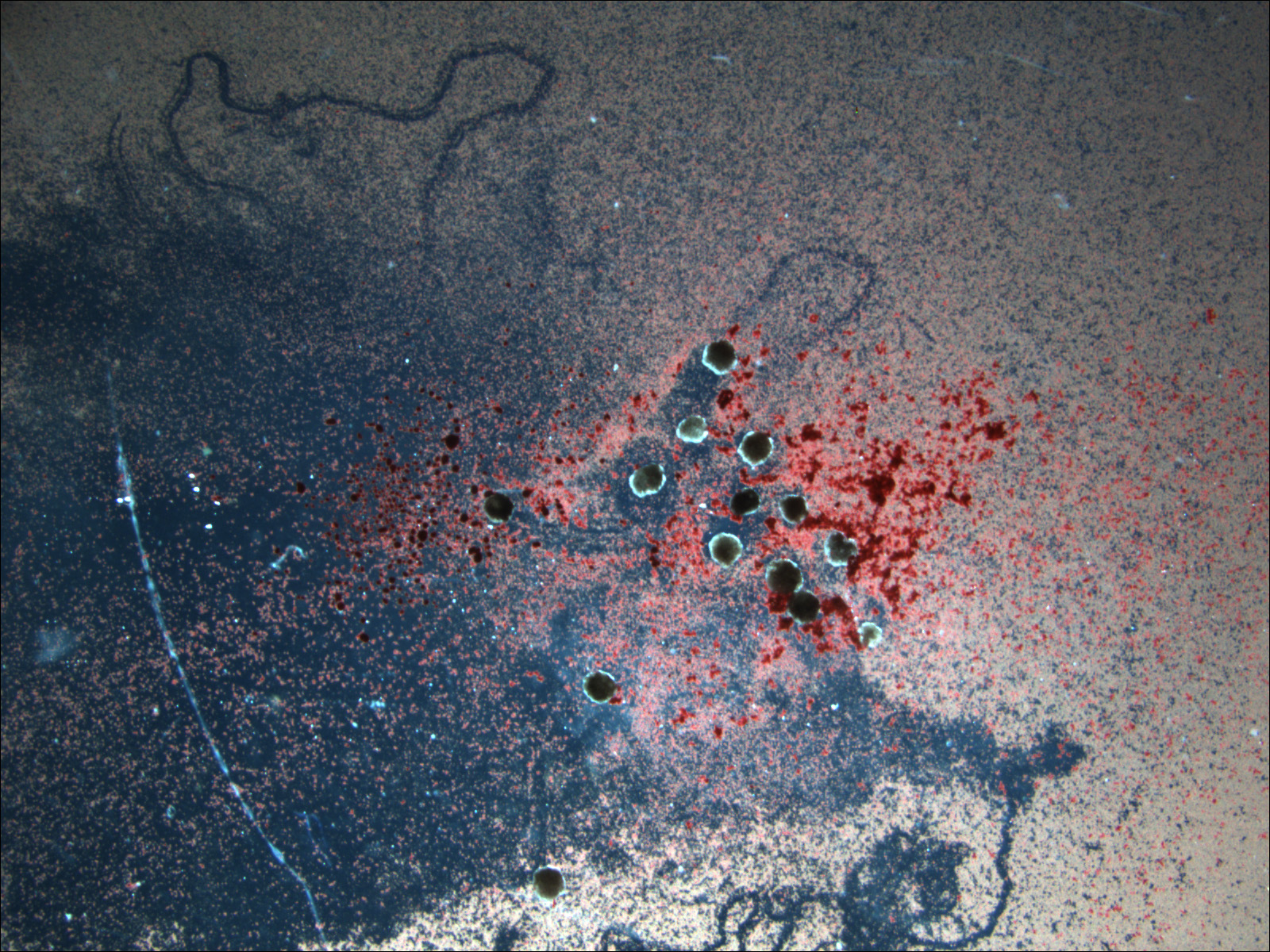 A swarm of CDOs herds particulate matter into a pile.

A swarm of CDOs herds particulate matter into a neat pile. 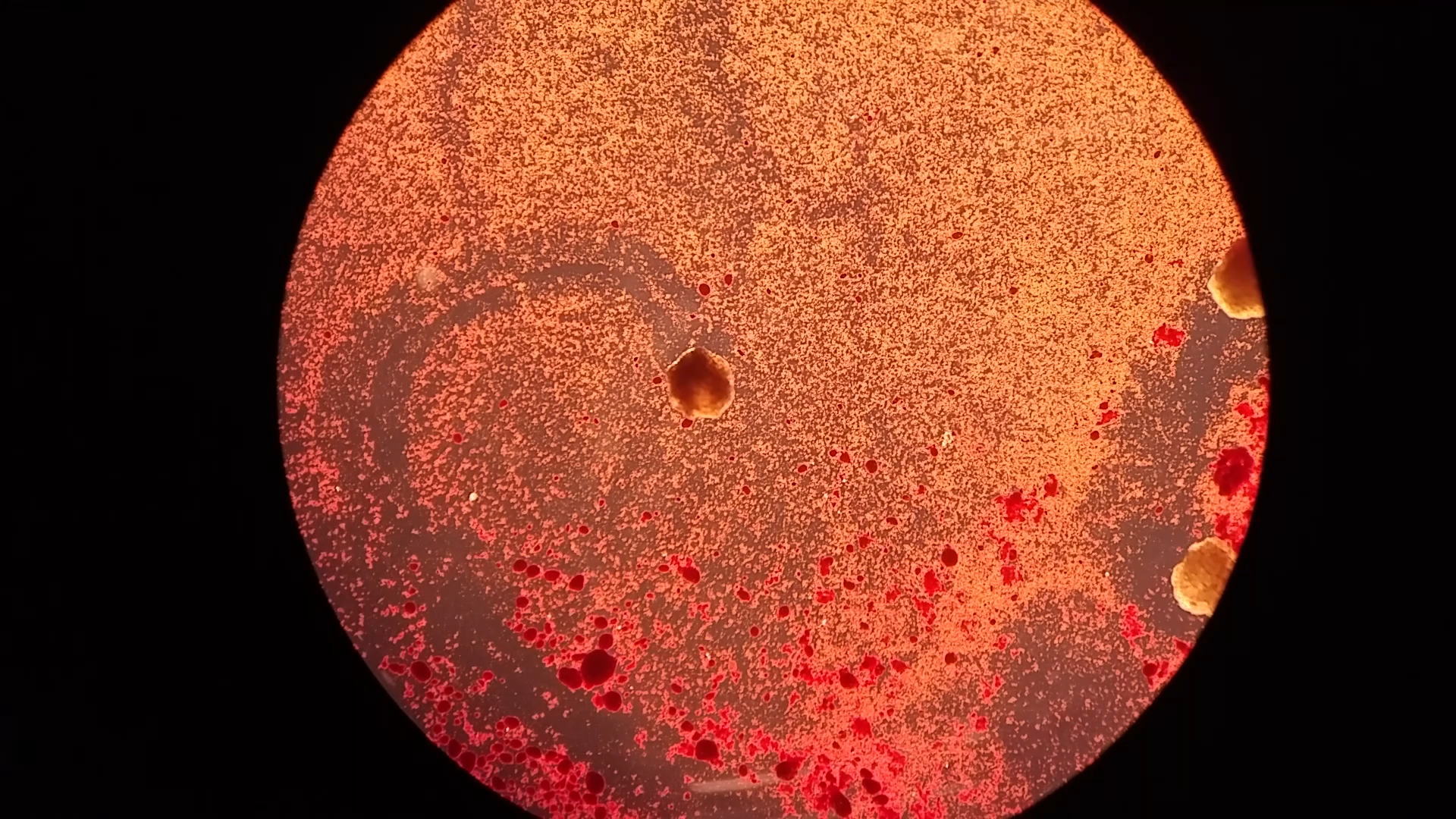 Close-up of a single movement trace. 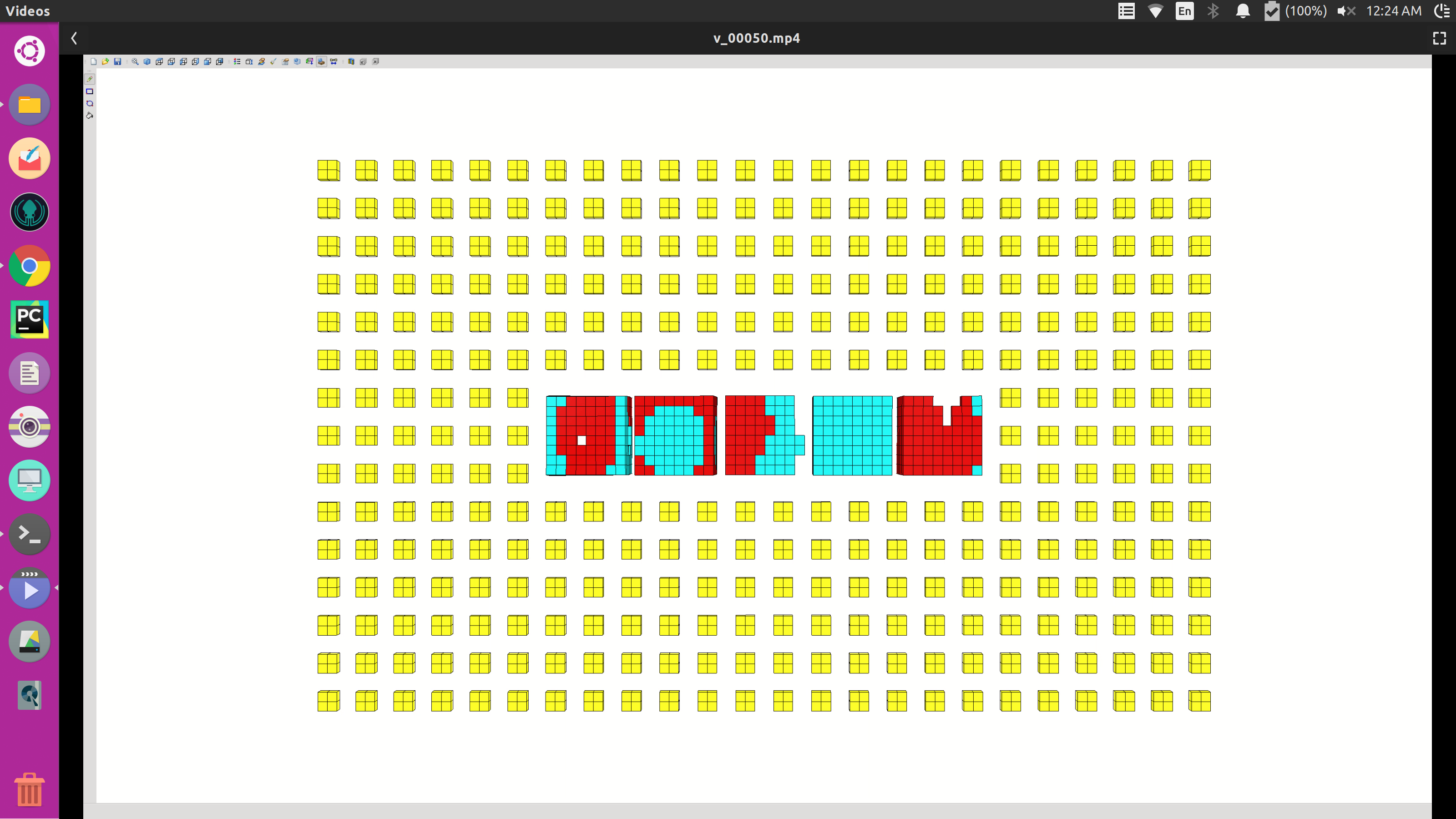 A group of five designs are initially placed amid a 15-by-15 lattice of yellow debris, in simulation. 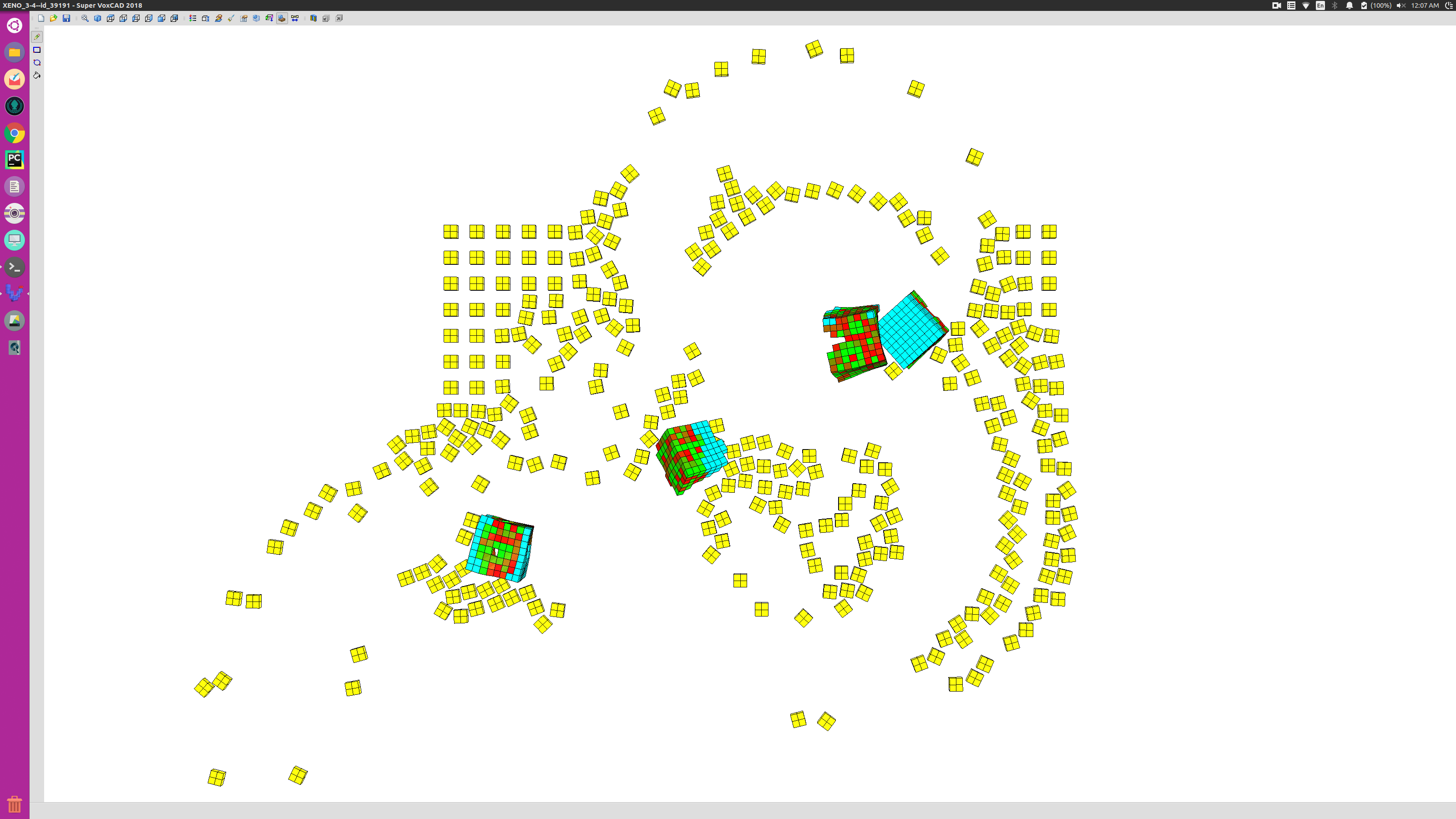 Some of the designs travel straight, others move in elliptical orbits, colliding and coupling with other designs for multiple revolutions. Video. 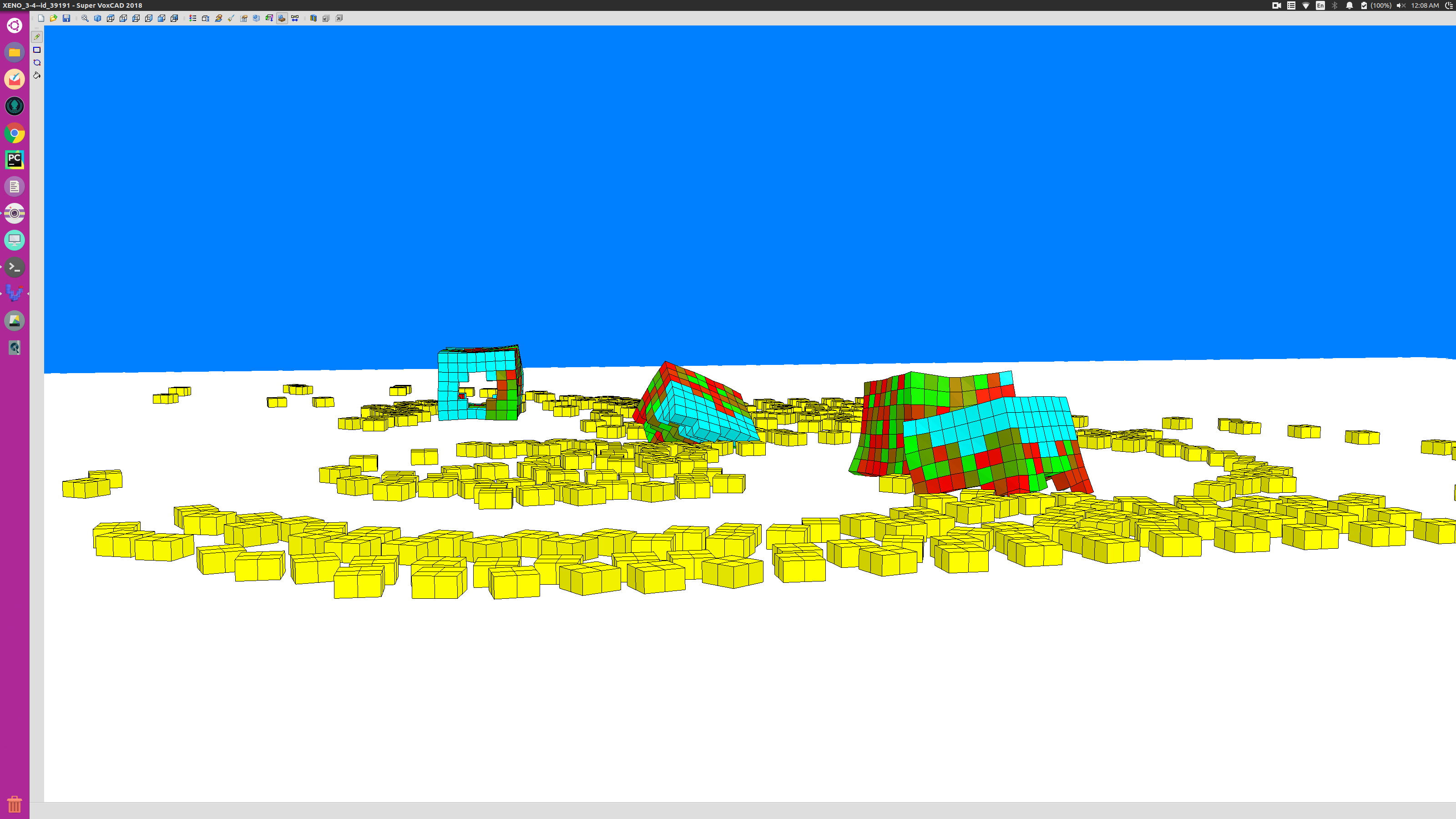 Side view of the image just above (virtual organisms cleaning a virtual petri dish). 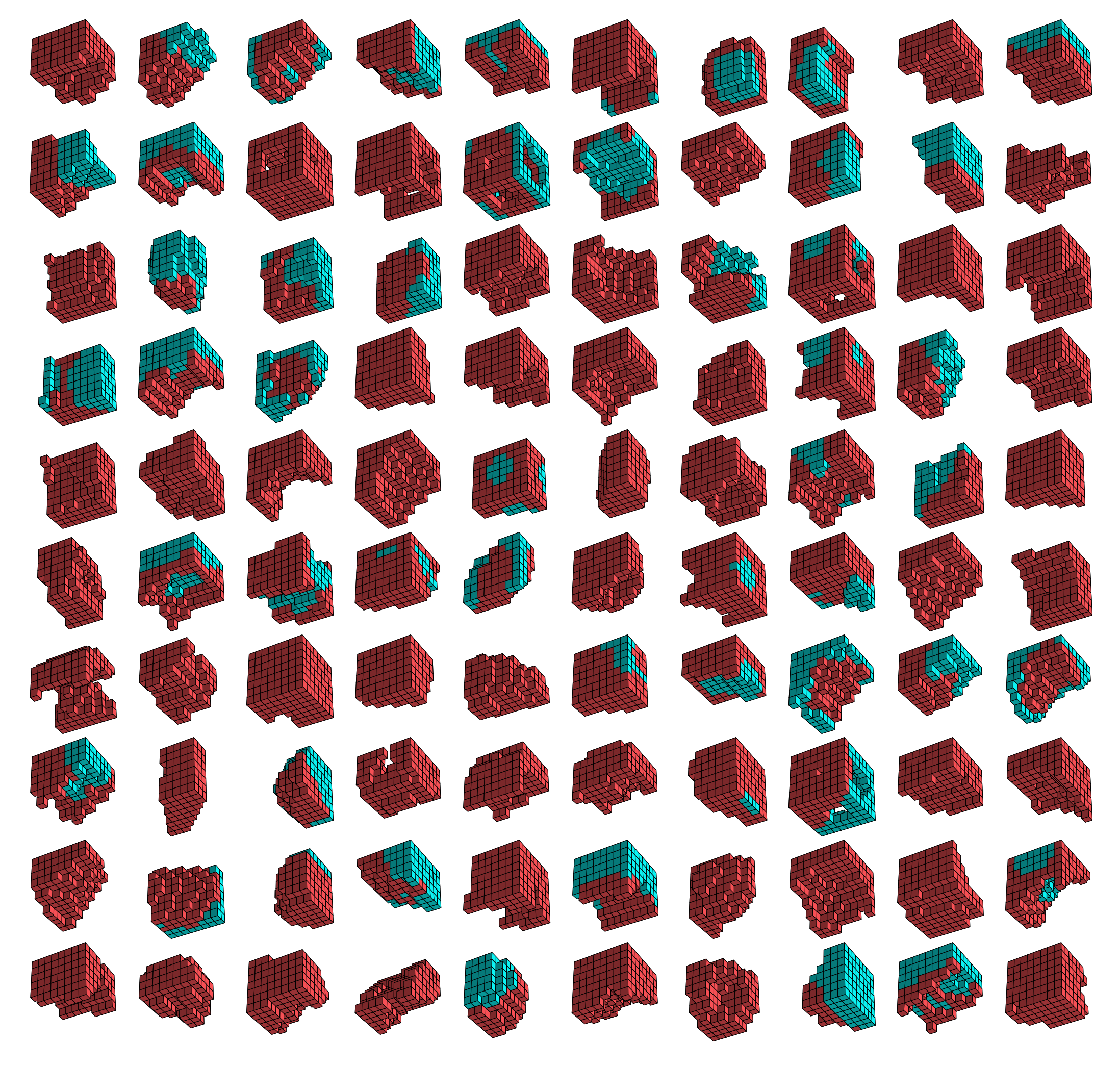 One hundred computer-designed blueprints for a walking organism composed of passive (cyan) and contractile voxels (red).

Five of the above 100 blueprints were built using stem cells taken from early frog embroyos.

One of the over 100 computer-designed organisms. Left: the design discovered by the computational search method in simulation. Right: the deployed physical organism, built completely from biological tissue (frog skin (green) and heart muscle (red)). 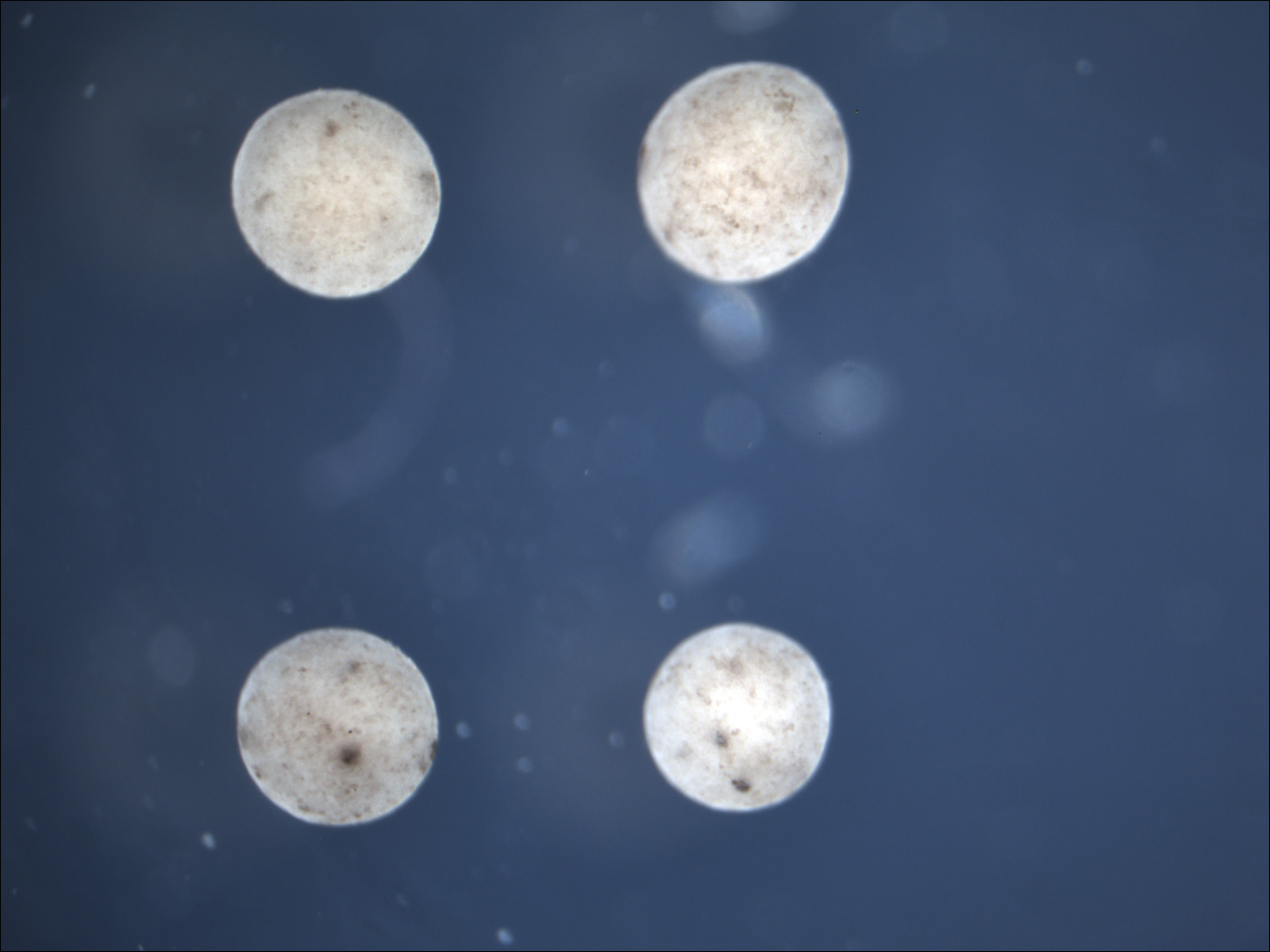 Aggregated cells prior to shaping. 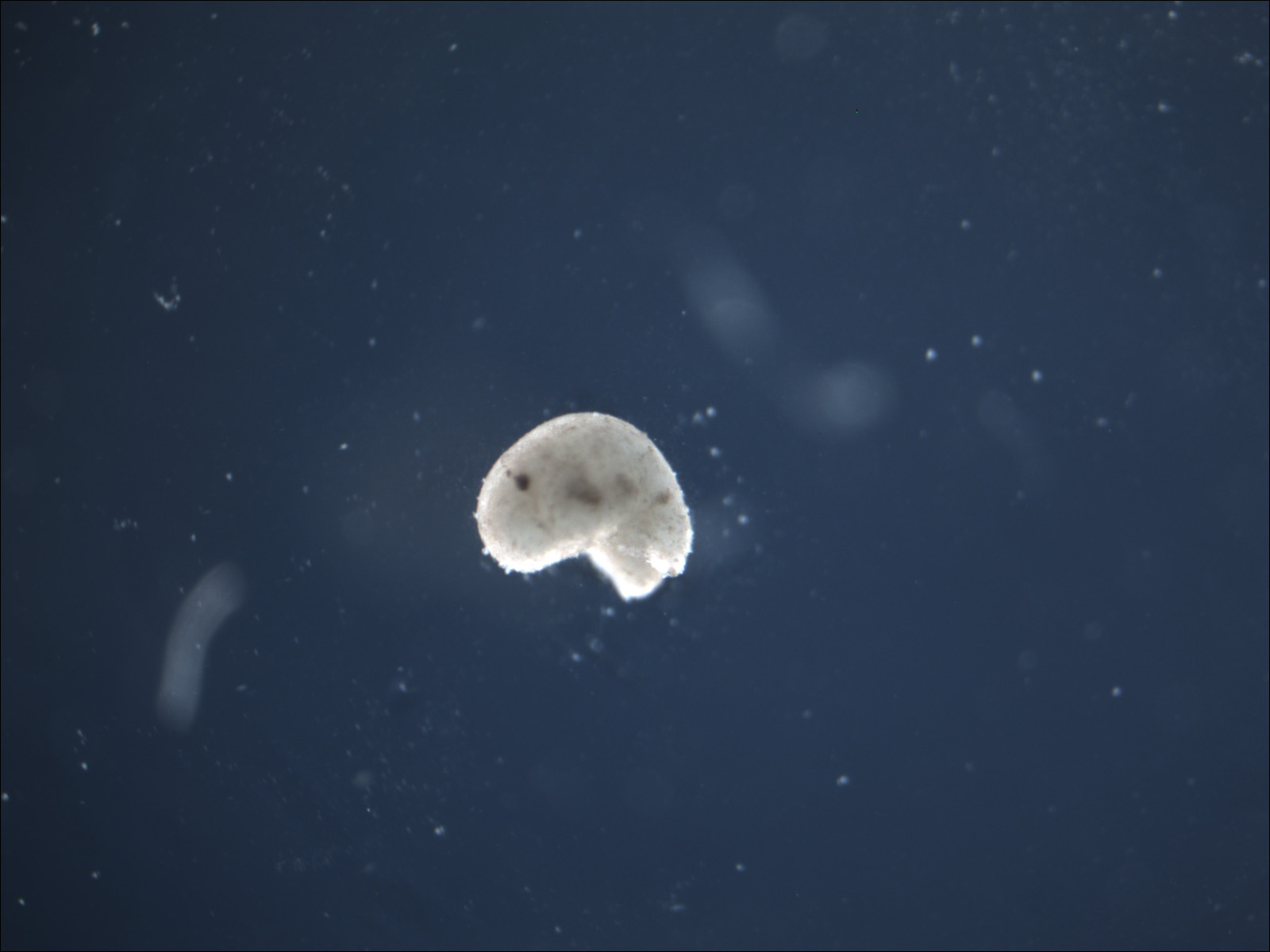 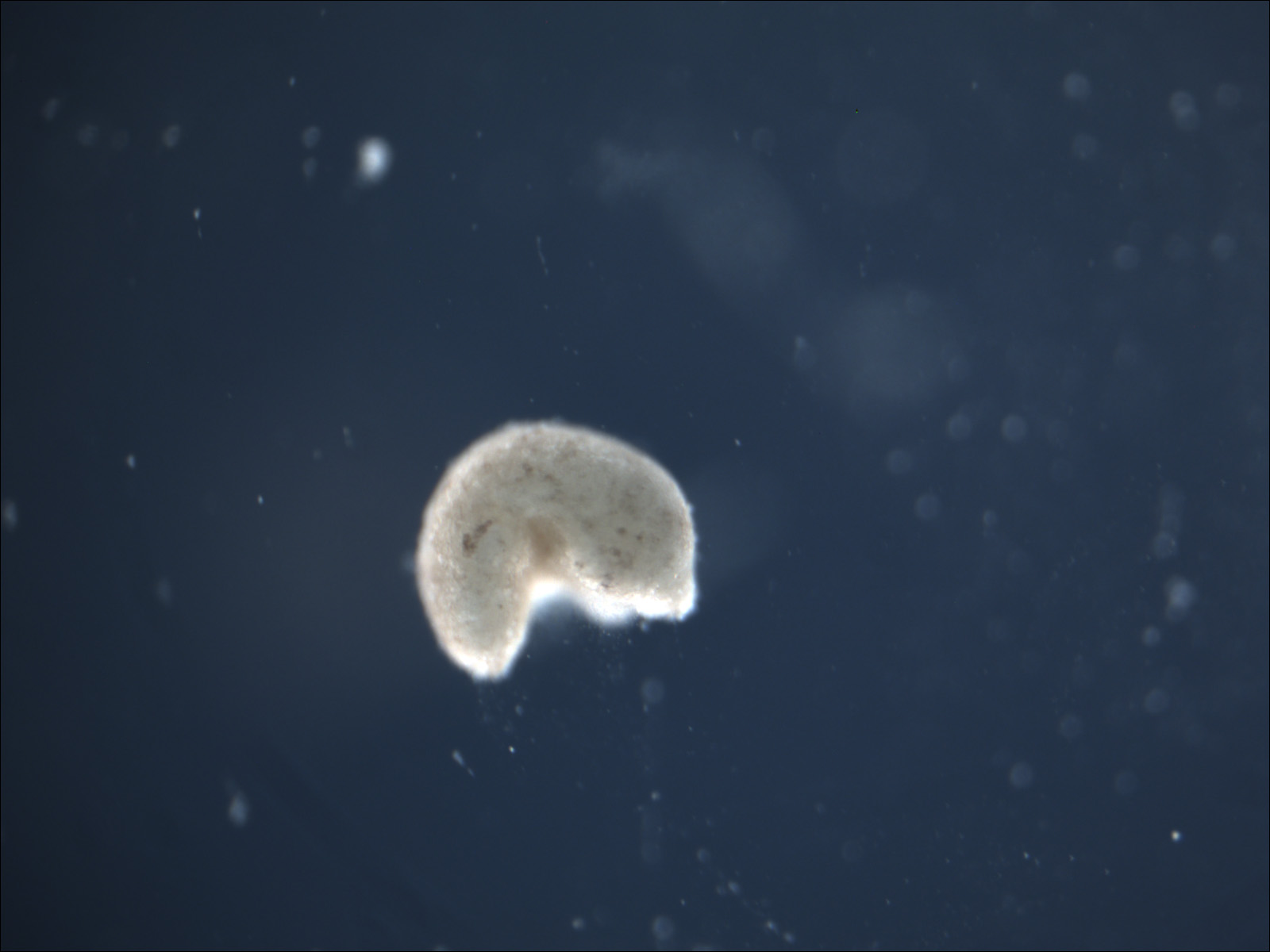 An L-shaped organism with thin limbs. 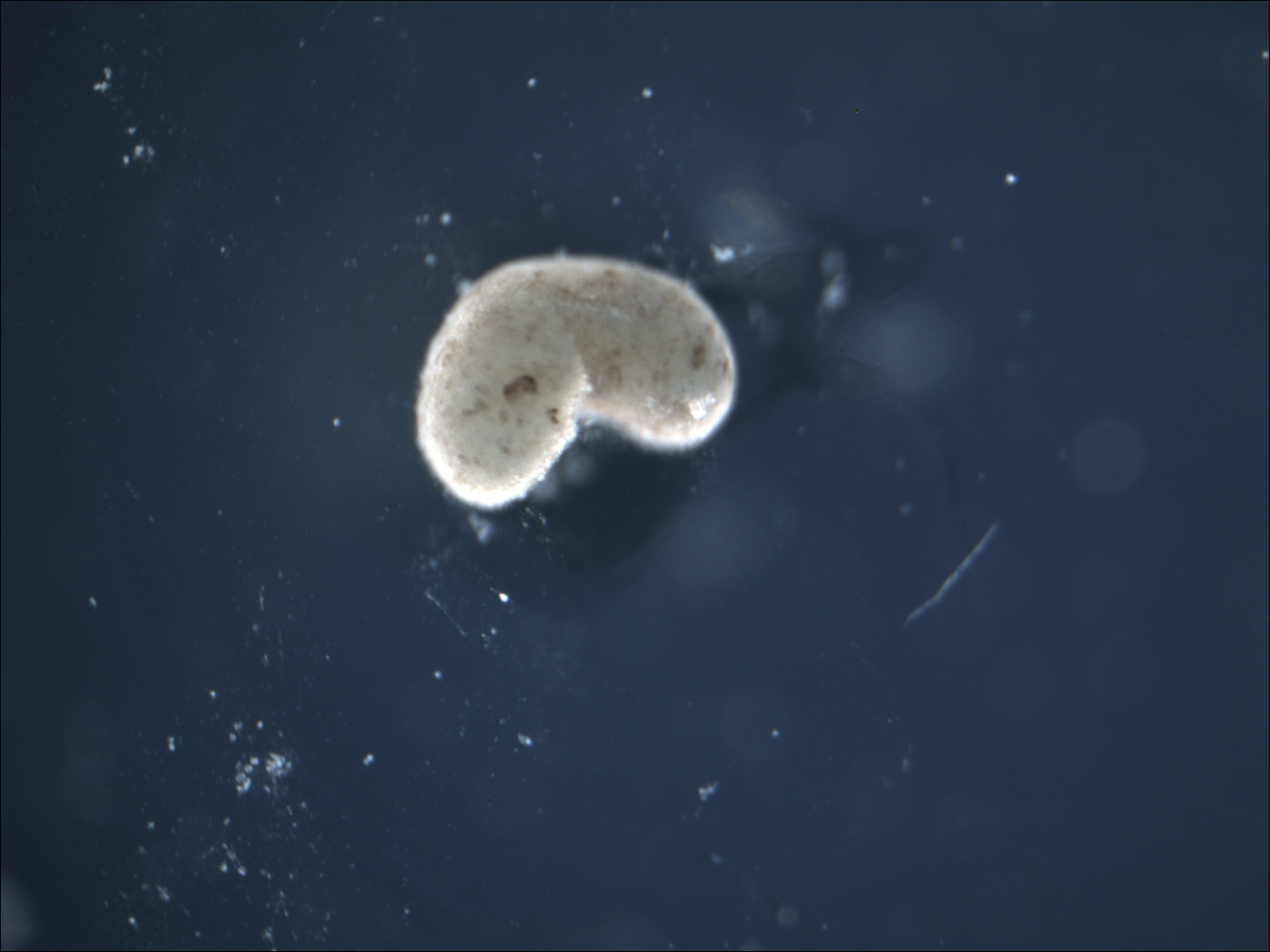 An L-shaped organism with fat limbs. 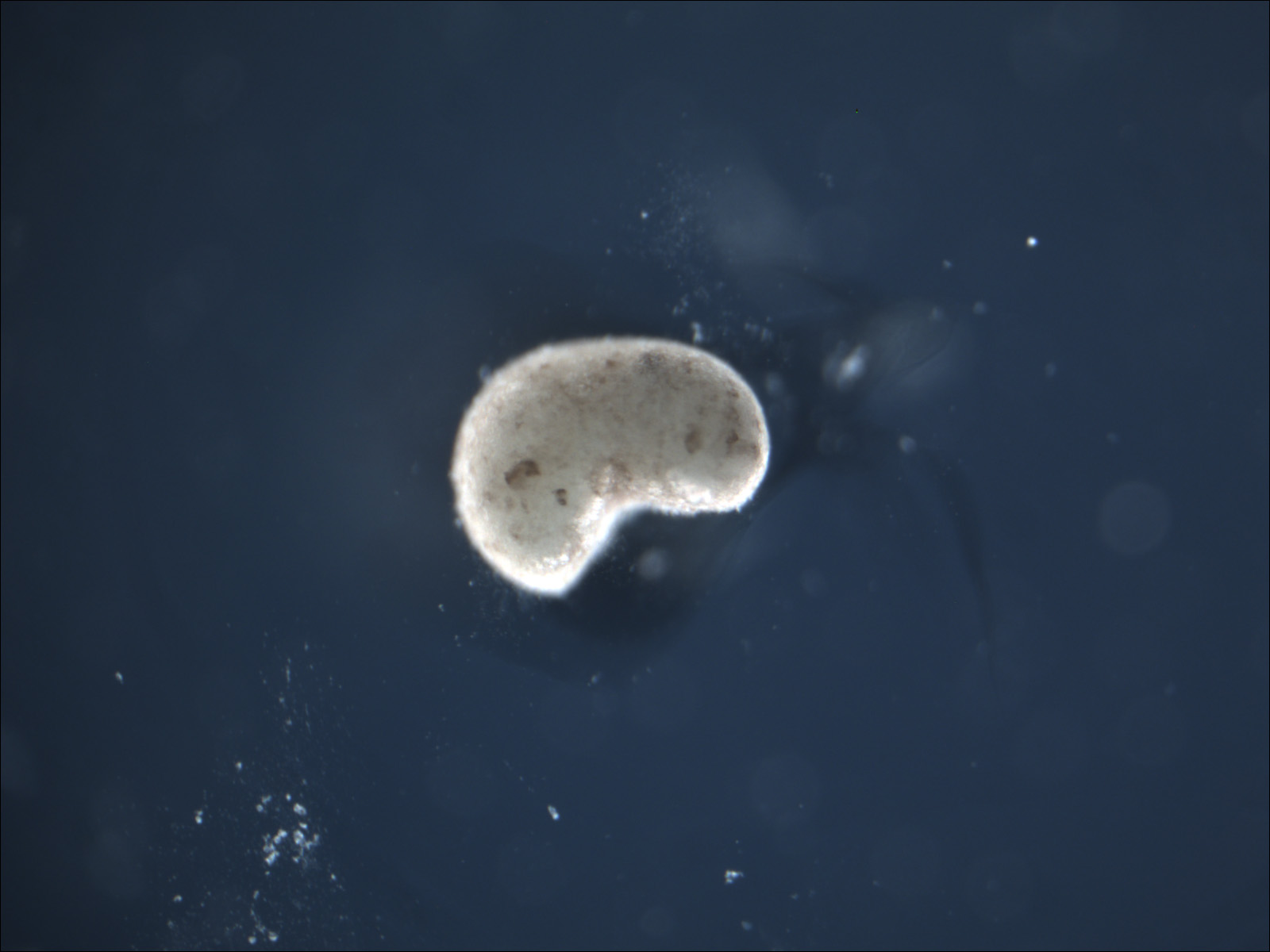 An L-shaped organism with short limbs. 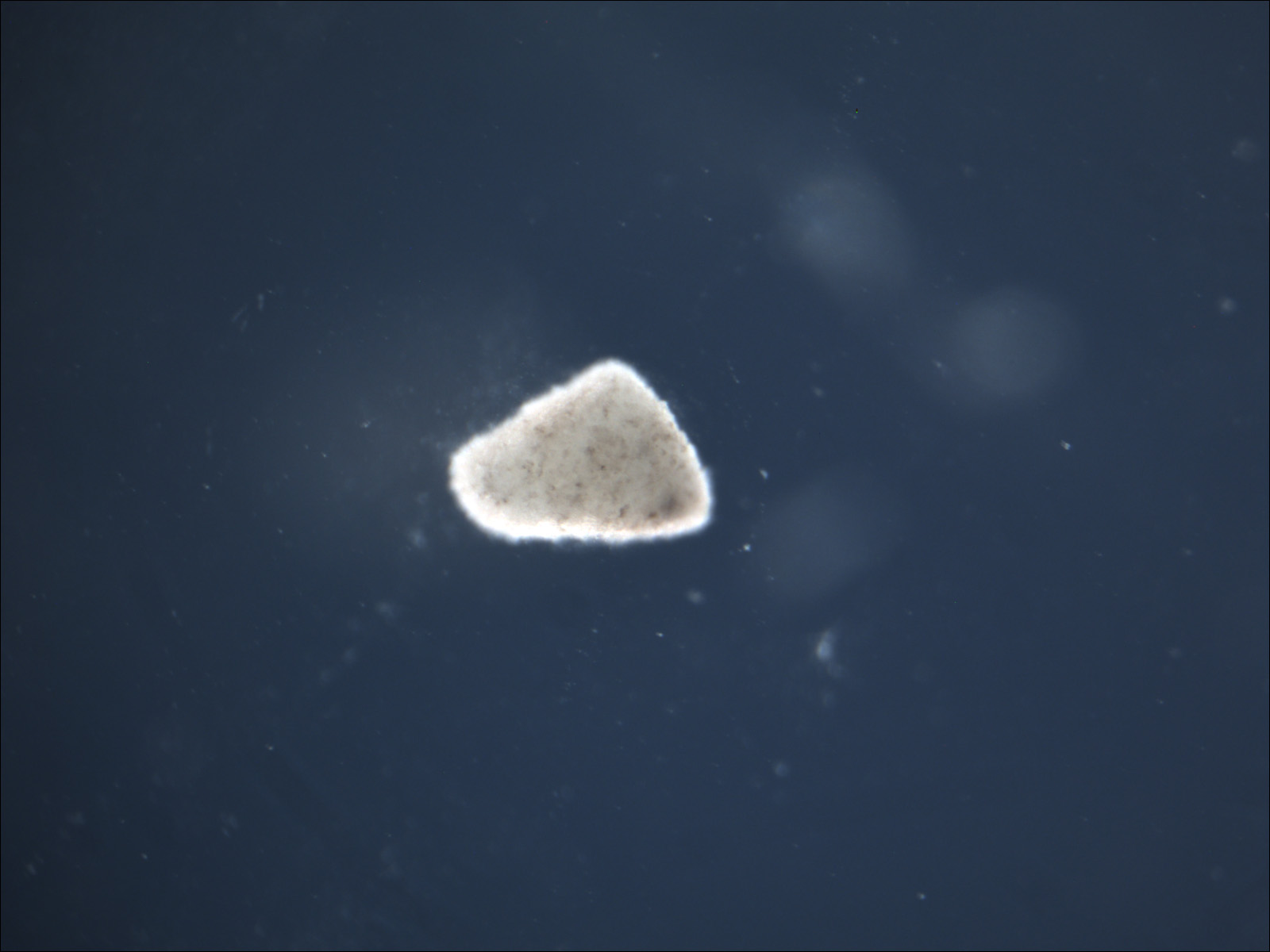 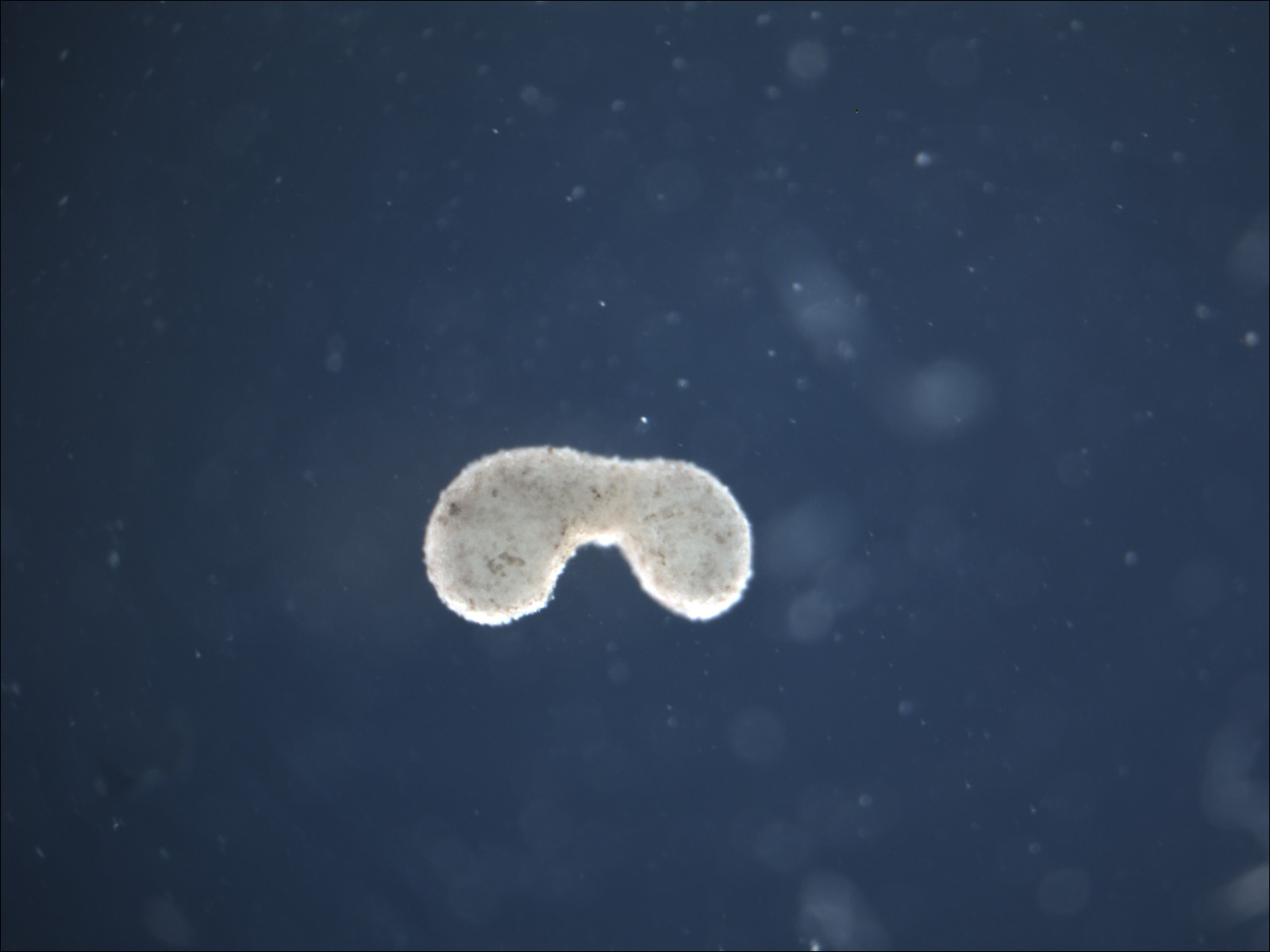 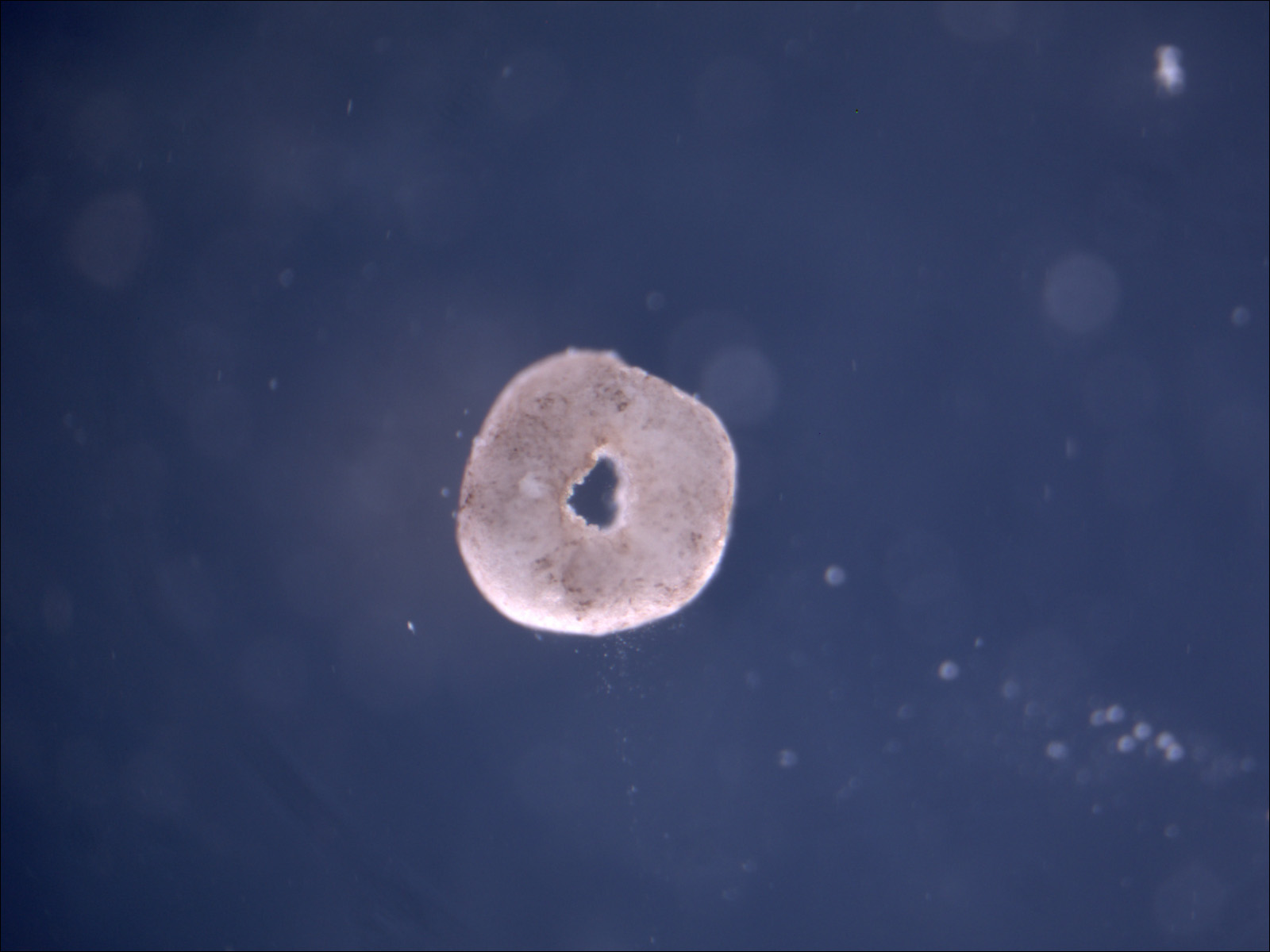 A torus-shaped organism with a hole through its center. 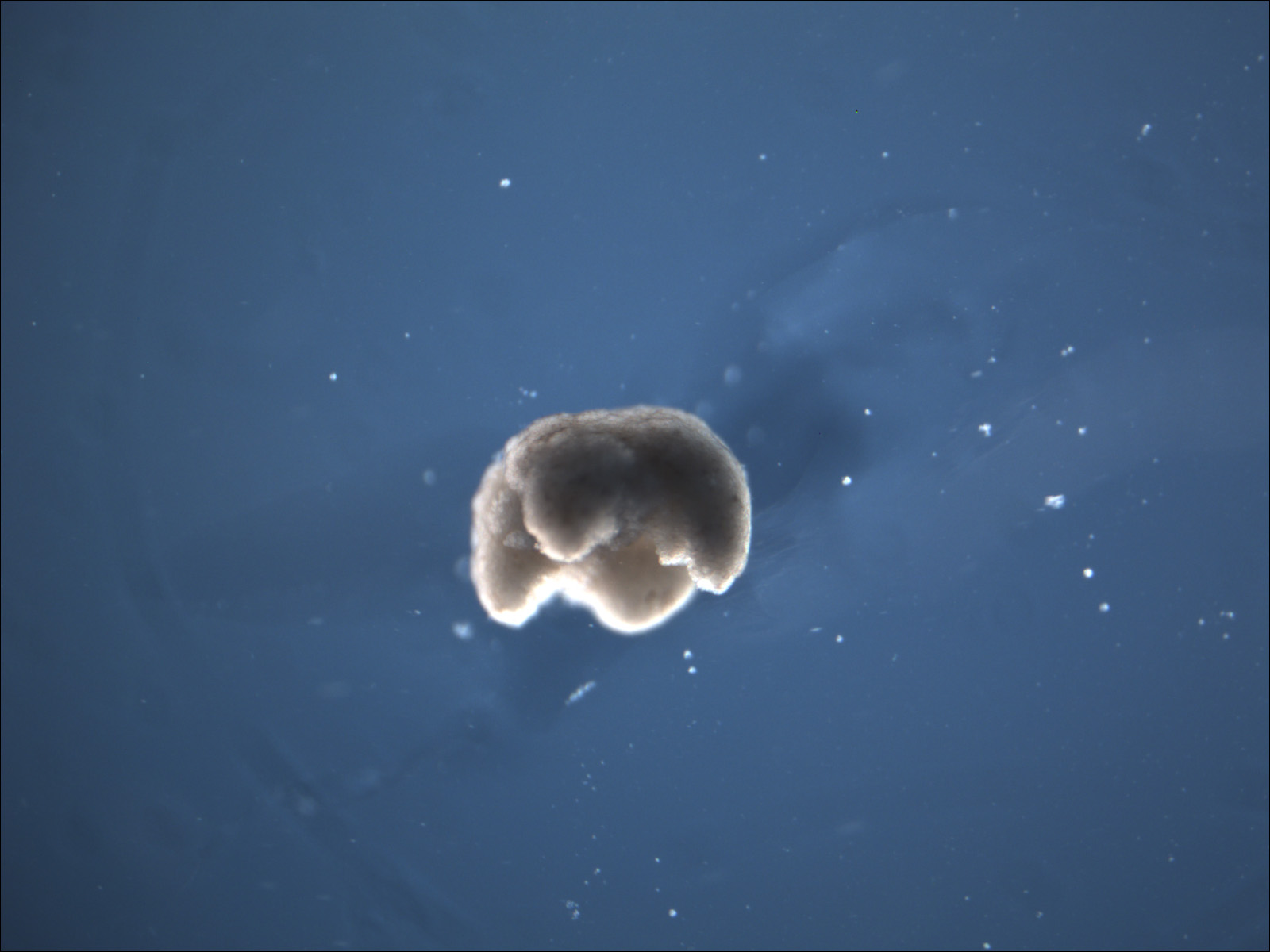 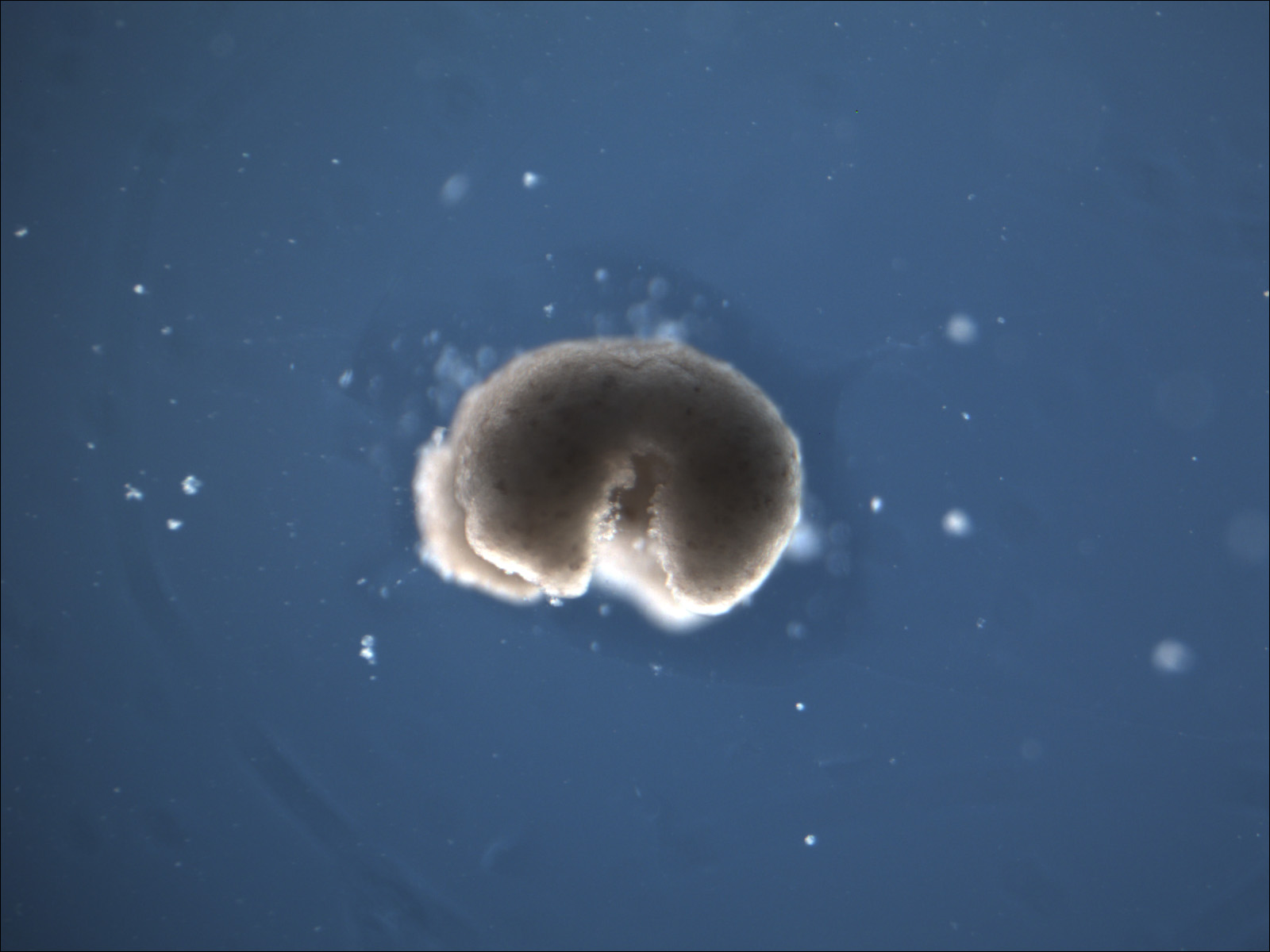 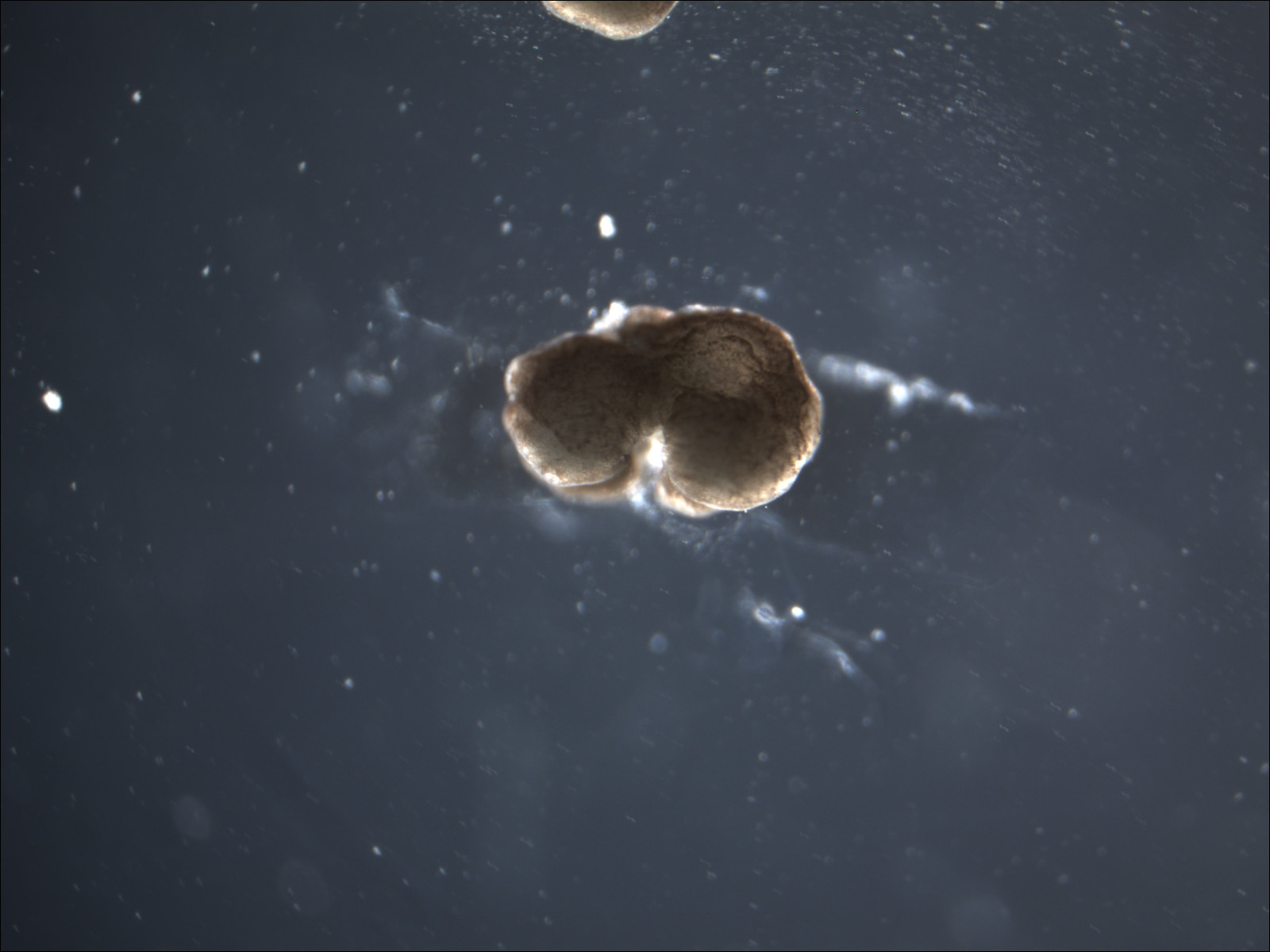 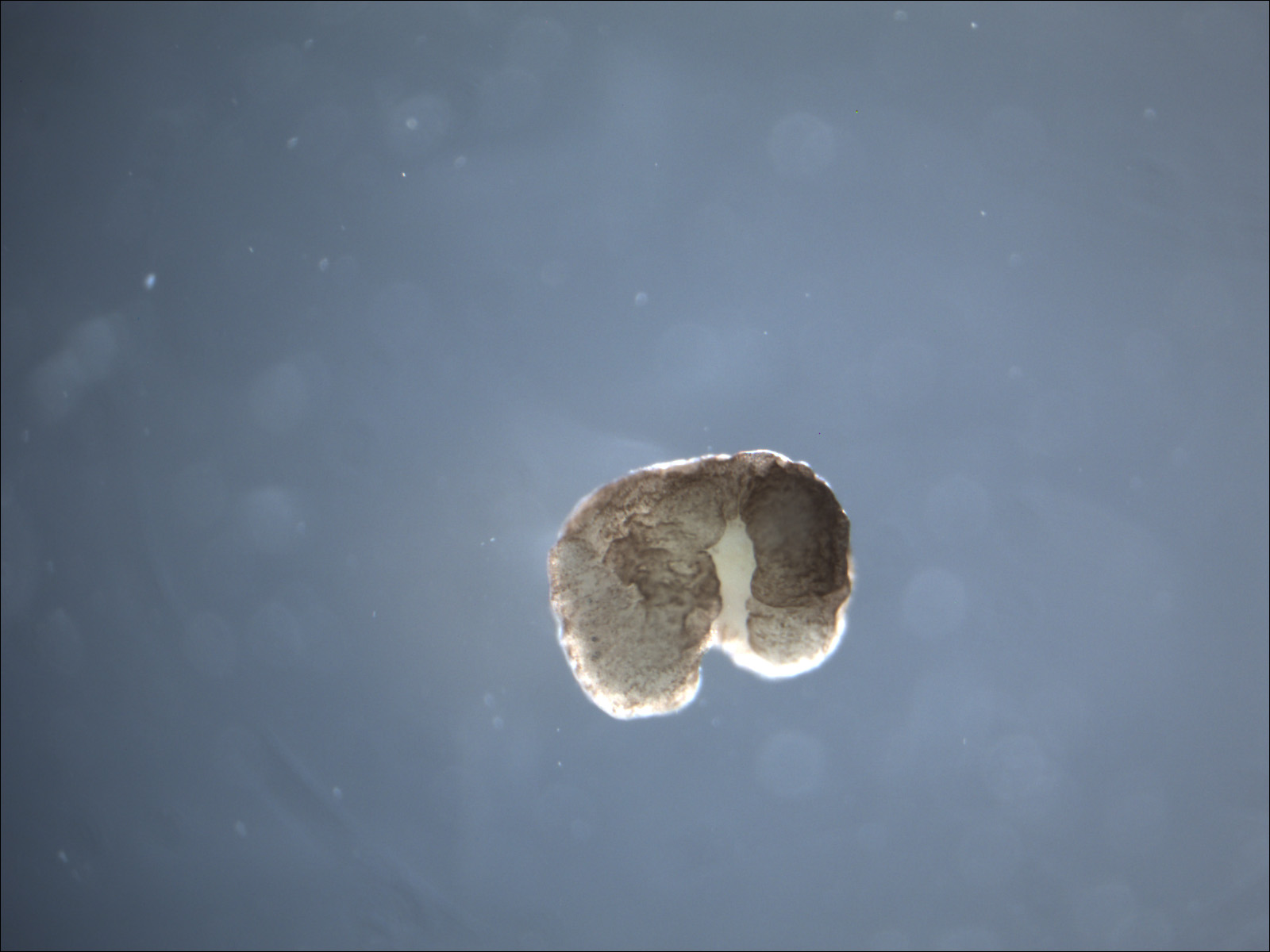 A manufactured organism with a large hind leg and a smaller foreleg. 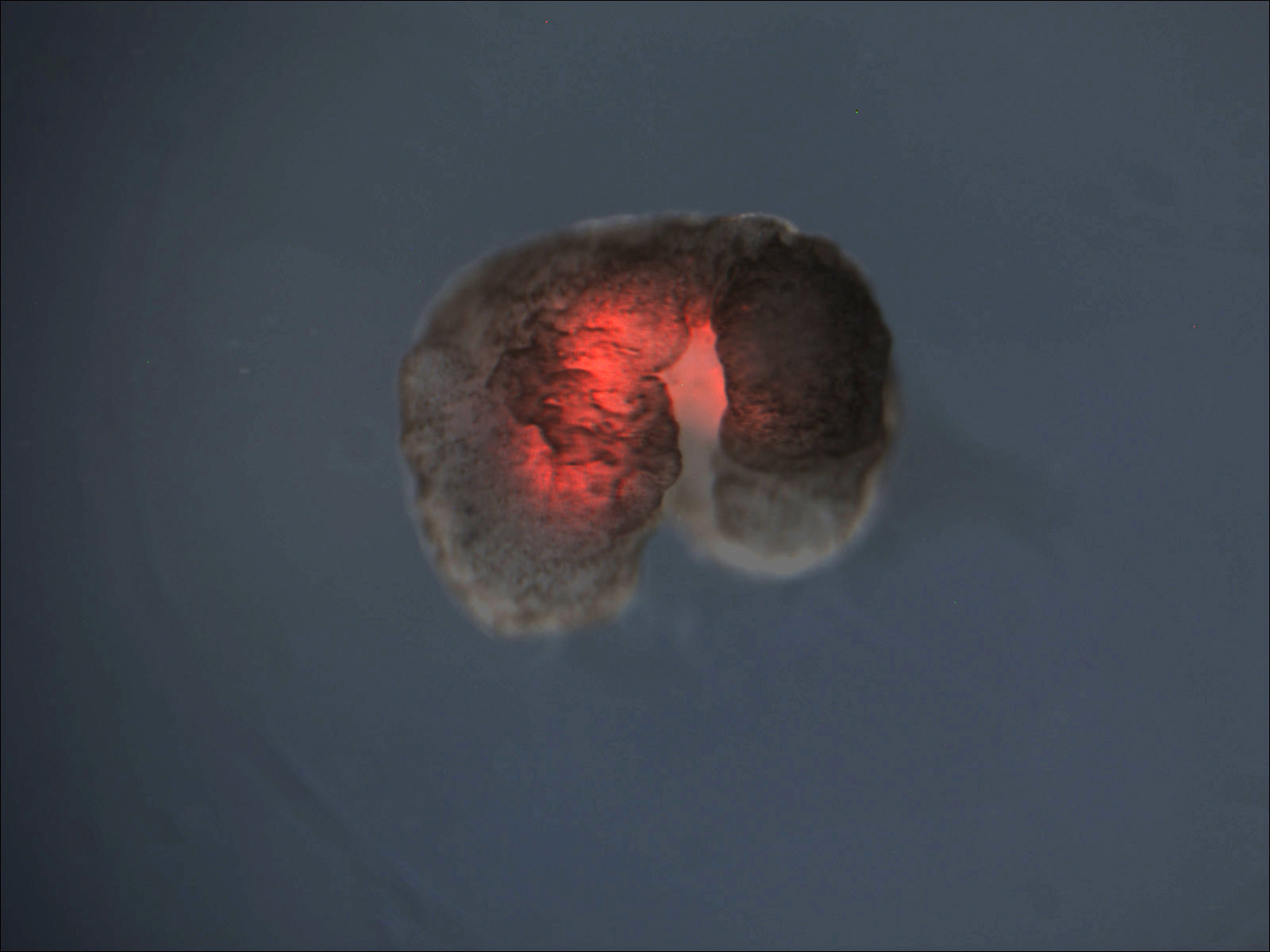 The manufactured organism from just above is layered with heart muscle (now glowing red). AI determined the overall shape of the organism, as well as the location of its muscle, to produce forward movement. 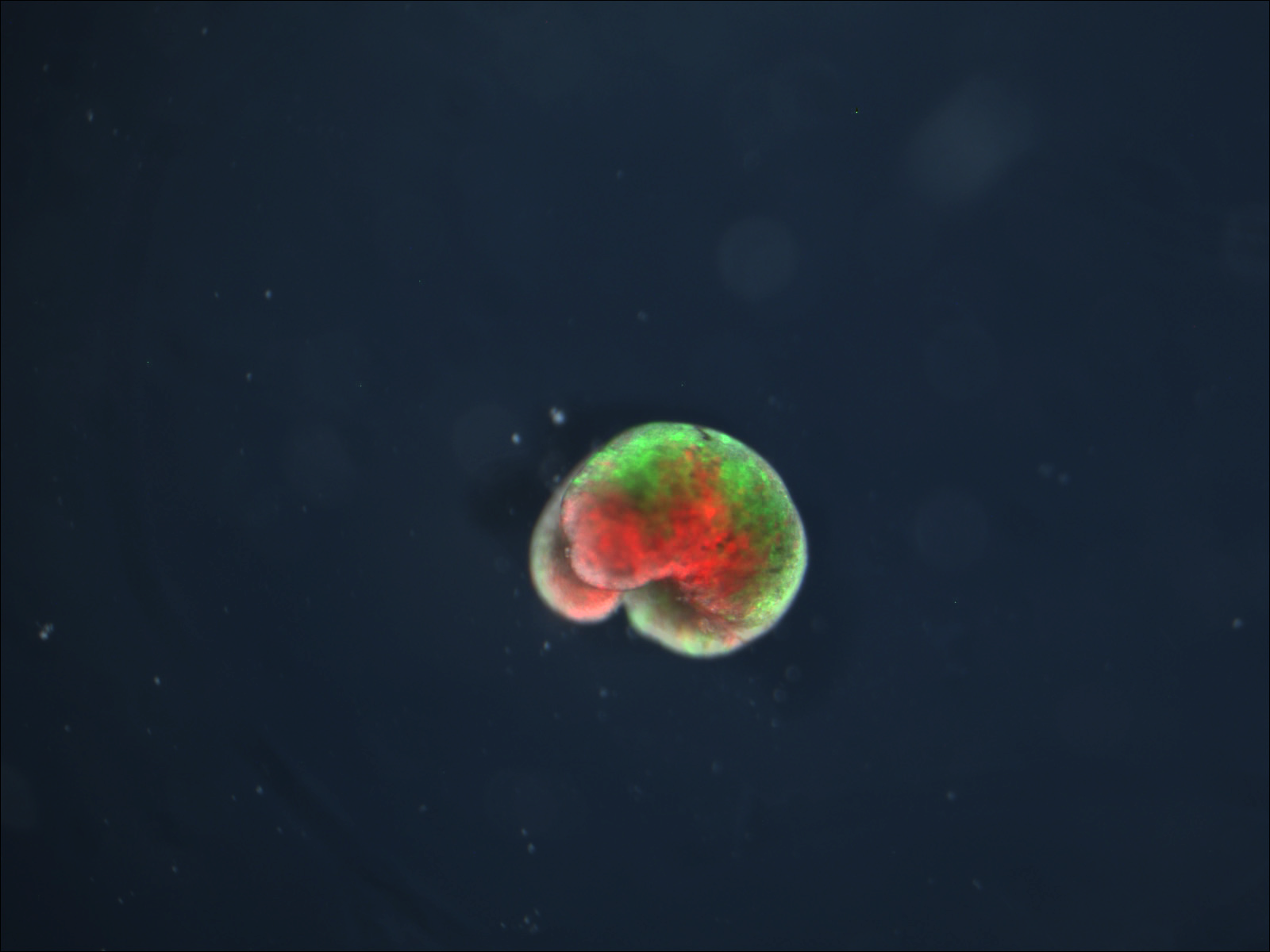 A manufactured organism with two muscular hind limbs was the most robust yet stable and energy-efficient configuration of passive (epidermis; green) and contractile (cardiac; red) tissues found by the computation design algorithm.

A held slide of a CDO (black speck in the center) for scale. The organism is tiny, only 500 microns across, but contains almost 5000 cells.